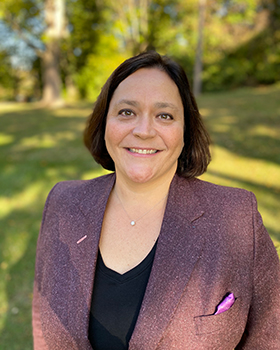 A lifelong Presbyterian, Emily grew up in Cambridge, Ohio. She graduated from Denison University with a degree in Biology and Physical Education/Athletic Training. She earned a Master of Science from Indiana University and then served as an assistant professor/athletic trainer at Denison University for seven years before answering God’s call on her life. She was an active member and ordained deacon at Broad Street Presbyterian Church in Columbus, Ohio.

In 2008, she graduated from Princeton Theological Seminary in New Jersey with a Master of Divinity degree. While in seminary, she served as a pastoral intern at The Brick Presbyterian Church in New York City. Emily participated in a Lilly Endowment grant for Faithful Practices for Congregational Leadership. She received The C. Frederick and Cleta R. Mathias Memorial Award in Worship and Pastoral Ministry.

Following seminary, she completed a year-long hospital chaplain residency program at Riverside Methodist Hospital in Columbus, Ohio. In 2010, Emily was ordained as a Minister of  Word and Sacrament in the Presbyterian Church (USA) and served First Presbyterian Church, Wooster, Ohio as the transitional associate pastor. Returning to Columbus in 2011, Emily was called to Nationwide Children’s Hospital as a chaplain in the Neonatal Intensive Care Unit. From 2012-2014, Emily served as the interim director of mission and young adults at Broad Street Presbyterian Church, Columbus, Ohio.

Prior to her current call in 2015 as Associate Minister at First Congregational Church, United Church of Christ, Columbus, Ohio, Emily served at Old Stone Presbyterian Church as their Transitional Pastor. At First Congregational Church, Emily’s role incorporates pastoral care, administration, preaching, and teaching. She supervises administrative staff and resources commissions and committees for Stewardship, Personnel, Church Growth and Church Vitality, Justice and Mercy, and House and Grounds. She hopes to engage members in discovering their spiritual gifts to better serve God’s kingdom, working for justice in our community, nation, and world. Emily has a heart for mission and walking with individuals in their faith journey wherever it may lead. She has participated in mission opportunities in Peru, Guatemala, and Malawi.

Emily has dual standing with the Central Southeast Association, United Church of Christ, and is a member in good standing with the Presbytery of Scioto Valley. She serves in committee leadership with both the UCC and PC(USA). Emily is an adjunct faculty for Field Education at the Methodist Theological School in Ohio. She was recently asked to be part of a pastoral leadership cohort with Macedonian Ministries.