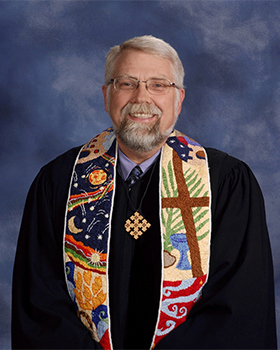 A devoted husband and father, Tim and his wife, Susan Sitler, have been married since November 1985 and are the parents of four adult children and grandparents to three grandsons and one granddaughter.

The Rev. Dr. Timothy C. Ahrens began his ministry as Senior Minister of First Congregational Church, United Church of Christ in downtown Columbus on January 23, 2000. A church known for its witness to social justice since its birth as an abolitionist congregation in 1852, Rev. Ahrens is the fifth consecutive senior minister from Yale Divinity School and is a lifelong member of the United Church of Christ.  He is a 1980 graduate of Macalester College with a double major in Religious Studies and Political Science. Since January 2000, under his leadership, First Church has doubled in membership during an era when seven downtown churches have closed their doors.

Rev. Ahrens has been a strong and respected voice in the community since 1989 when he arrived in the city to serve North Congregational UCC on Henderson Road. He has built relationships with other pastors, laypeople, and city leaders to work to end poverty through improved education, fair labor laws, job creation, fair housing, health care reform, and equal rights for all people. He has advocated for the end of gun violence and the abolition of the death penalty and has served two terms as co-president of B.R.E.A.D. (Building Responsibility Equality And Dignity), which he helped found in 1996. To move compassion for the poor forward across Ohio, Rev. Ahrens launched We Believe Ohio in 2006. Rev. Ahrens was recently named to the board of the Center for Community Solutions.

Rev. Ahrens has preached in churches across the country and has served as preacher of the week in Chautauqua, New York; Lakeside, Ohio, and Bay City, Michigan. He has preached, lectured, and taught at Yale Divinity School and Chicago Theological Seminary. He has preached at the MAAFA celebration at St. Paul’s Community Baptist Church in Brooklyn, N.Y. In October 2011, he spoke and offered a eulogy at a home-going celebration for the Rev. Dr. Fred Shuttlesworth in Birmingham, Alabama.

He has lectured on Washington Gladden and the social gospel movement on a number of occasions and his comments and columns have been widely published and appeared most recently in The Wall Street Journal and The Washington Post in a column by E.J. Dionne. He has also appeared in the National Catholic Reporter, The Christian Science Monitor, New Yorker magazine, the New York Times, the Chicago Tribune, Christianity Today, and Christian Century. He appeared in and has written for Reflections magazine, published through Yale, and has also appeared in over 40 Ohio newspapers. He has been quoted in several books on religion in America and has had sermons published in several interfaith books and periodicals. For years, he wrote regularly for the Columbus Dispatch’s “Faith and Values’’ section. He wrote a blog for the newspaper in the summer of 2010 chronicling his travels and experience among Jews, Muslims, and Christians in the Middle East and Spain. He is the author of Acts Comes Alive, 12 Keys for Reviving the Church and is currently a contributing editor to The Columbus African American Journal.

He served from 2009-2013 as a member of the board of directors of Faith in Public Life, a faith-based national organization that seeks to influence public policy has been involved with the Universal Health Care Action Network in Ohio, and has spoken at many rallies at the Statehouse on issues of social justice. He is the 2008 recipient of the William Sloane Coffin Award, given by Yale Divinity School in recognition of a person’s commitment to peace and reconciliation, the only local church pastor to have received the award. On September 11, 2011, he received the Distinguished Citizen Award for social justice and community action from the Interfaith Youth Group of Central Ohio. He has also won The Good Life Award and several other awards for his work on behalf of the LGBT community. In May 2014, he received the Alvin R. Hadley Social Justice Award from the Spirituality Network of Ohio. In August 2011, Rev. Ahrens joined The Dominican Sisters of Peace as associate of the order. He currently serves on the Mayor’s Advisory Council and is on a review committee serving the Columbus City Schools.

He has served the United Church of Christ at the association, conference, and national level. Rev. Ahrens was ordained in his home congregation, St. John’s United Church of Christ, in Lansdale, Pennsylvania, on June 23, 1985. Before coming to First Church, he served as senior pastor of North Congregational United Church of Christ in northwest Columbus for more than 10 years. Prior to that, he served Bethany UCC, Cleveland, Ohio, and prior to his ordination, he served in three urban settings of ministry in St. Louis, New Haven, and Philadelphia, stimulating growth and revitalization by helping congregations to become more multi-racial, more multi-cultural and more accepting and tolerant of all people.

Rev. Ahrens earned his Doctor of Ministry degree from Chicago Theological Seminary in May 2015. His thesis was entitled: “Young and Growing Stronger: Creating a Model of 21st Century Prophetic Witness Leaders with a New Generation.” He is currently working on two books.