Prophet of the Social Gospel 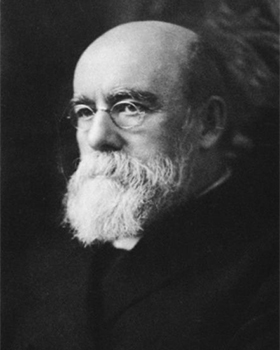 Washington Gladden (February 11, 1836-July 2, 1918) was one of the earliest and most influential proponents of the Social Gospel Movement. The Social Gospel Movement was a religious movement that grew out of the industrial and urban revolutions of the late 19thcentury. Its advocates believed that salvation was the symbiotic relationship between the personal and the social. One could not separate one’s own personal salvation from the salvation of the world. In practice, the Social Gospel meant everyday service to others and a commitment to social justice for all.

Solomon Washington Gladden was born in Pottsgrove, Pa., and grew up on a family farm in northern New York. After graduating from Williams College, he wrote, edited magazines, and served as a pastor in New York, Massachusetts, and finally in Columbus, Ohio, where he served as Senior Minister of The First Congregational Church, then located on the north side of Capitol Square, for 35½ years. Gladden never completed a theological degree. But by life’s end, he had received 35 honorary doctorates and lectured, among other places, at Notre Dame, Yale, Oxford, and Harvard twice. The Ohio Historical Society contains many of Gladden’s writings – including 66 books and pamphlets, over 90 articles from papers and periodicals, and more than 2,500 sermons, plus additional speeches, reports, and personal papers. All of these were written with a quill pen including his famous hymn, O Master Let Me Walk With Thee.

At First Congregational Church, Columbus, Gladden’s preaching led to sizeable membership growth and wide community impact. Gladden believed God was present in human affairs and consequently he preached regularly on critical and relevant issues of the day. He preached twice each Sunday – in the morning and evening. His evening sermons were reprinted on page 1 of The Ohio State Journal every Monday morning. The topics ranged from equal rights for women and African Americans, to labor rights, to the impact of capitalism and socialism on Christianity, to the expansion of cultural and recreational opportunities in America’s cities, to international peace.

Gladden’s activities paralleled his preaching. In Columbus, he served a term on the city council, helped parishioners establish two settlement houses (Gladden Community House and the Godman Guild), served on the Board of Trade, launched new congregations in underserved neighborhoods, condemned waves of anti-Catholicism, promoted religious cooperation, ministered to students and faculty at the Ohio State University and encouraged influential members to apply Social Gospel principles in their factories and shops. At his death, The Ohio State Journal announced  that Columbus had lost its “First Citizen.”

Beyond Columbus and Ohio, Gladden worked for reforms that gave the Progressive Era of the early 20thcentury its character. His work won the friendship of Theodore Roosevelt and the admiration of Woodrow Wilson, William Jennings Bryant, Jane Addams, among many others.

Near the end of his life, Gladden said all religion came down to “friendship.” In Recollections, he concludes with these beliefs about the meaning of the Christian faith:

I am fain to believe that the time is drawing near when the Christian Church will be able to discern and declare the simple truth that religion is nothing but Friendship, friendship with God and with all people… Religion is Friendship – friendship first with the Great Companion, of whom Jesus told us, is always nearer to us than we are to ourselves, and whose inspiration and help us the greatest fact of human experience.

To be in harmony with God’s purposes, to be open to his suggestions, to be in conscious fellowship with Him – this is religion on its Godward side.

Then, turning manward, friendship sums it all up. To be friends with everybody, to fill every human relation with the spirit of friendship, is there anything more than this, that the wisest and best of Men can hope to do?